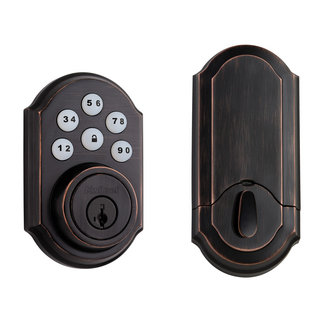 I had to rekey my old house before I moved into my new house. Over fifteen years we must of had ten relatives with copies of our keys as well as a couple of missing keys. At the same time our new house had a deadbolt key that had multiple copies made to allow contractors into the home during its remodel. Obviously it was time for a rekey of the deadbolts in the house but after my experience with the old house I decided it was time to update our lock technology.

One thing that drew me to Kwikset and not to their competitors is their Smartkey system. Next to the key slot is an extra slot. Slip the provided tool in and then whatever key you like and you've rekeyed your lock. While looking through the different styles available I came across the 909 model. The 909 has an electronic keypad with five number pads and a lock pad. More on this later but immediately it occurred to me that the number of possible code combinations was limited by this format.

The actual deadbolt is standard looking Kwikset. Brass construction with three different finishes available. What is different is the hardware that is mounted on the inside of the door. A very large construction houses the electronic components as well as the motor of the electronic deadbolt. If you have a standard layout with the deadbolt above the knob your good. If you don't you may have to get creative to get this large design to work.

Hidden behind a small cover is the PCB. Here you'll find a small button that enables the program mode. If you've ever installed a standard deadbolt this is the only thing that will strike you as new.

One really good feature of this design is that you won't need extra holes or make changes to your existing opening on the door. Once installed I noticed that the bolt itself kept striking the wood frame of the door. A little measuring and it turns out this bolt goes about one quarter of an inch further into the door jamb than my previous deadbolt. A little work with a chisel fixed that but only after I determined that I absolutely needed to lengthen this hole. More on that later.

So once you've bolted your hardware up you'll load four AA batteries into the battery holder. Hit the program button and enter your four digit code. Remember that there are only five pads with numbers? Yup. If your code were 3434 you'll actually end up pressing the second button four times. I suppose that may seem convenient to some folks but to me that screams a vulnerability with the code. Basically you've lost a huge combination of buttons that would be more secure. Going with the formula n^x where n is the number of digits and x being the multiplier by each subsequent digit then we've lost half of the possible combinations for only one number. With four digits we would expect 10x10x10x10 which would equal 10,000 possible combinations. What we really get is 5x5x5x5 =625 possible combinations. Worse, the numbers are laid out in a semicircle. It doesn't take much visual ability to notice if the button being pressed is at the top, left, or right in this layout. So if you plan to keep your code secret make sure you block prying eyes. At work I deal with electronic locks that have keypads with 10 numbers plus symbols such as * and #. In that scenario we have a possible total 1,000,000 combinations.

Before I even got to programming I had that problem with that bolt not seating completely. That means the lock was not actually working as a deadbolt. A craftily inserted tool could slide the bolt back. Before I even broke out the chisel I hit the lock button on the keypad and was greeted by an annoying sound of the lock continually trying to lock. For several seconds. Its at this point that I have to mention that the electric motor to this lock is unbelievably loud. Not loud like a blender. Loud like a motorcycle with no muffler loud. Since the bolt could not seat all the way to the lock position it kept cycling and would try again every few minutes. I found a dip switch on the PCB and turned off the autolock feature. After opening the depth of the jam side the bolt seated nicely but this didn't change the volume of this design. I disassembled and notice that even by hand (and key) the lock dragged. I greased the internal parts and added some spray lubricant into the lock cylinder. This helped immensely and helped with the noise. I'm really surprised the lock didn't come packed with a high quality grease in the first place as that extra load on the motor really affects how well the lock works.

I really like that I could rekey this lock to match other locks in my home easily. The sharing of numbers on the keypad is a let down. Its really a loss of possible combinations which would make this lock more secure. As far as working as a normal deadbolt it works as well as any other. As an electronic device I'd call this more entry level due to its only 625 possible code combinations. I like being able to change out the code easily - if I'm out of town I can give a new code to someone who is going to feed my pets and then switch it again when I get home. Of course I could cut a lot of keys - which is expensive and even less secure than a number code.